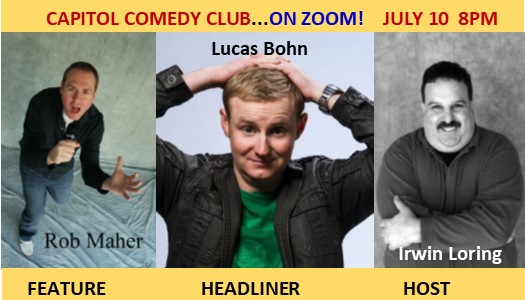 THANK YOU for your continued financial support in these very challenging times! We know you have many more choices now of where to get entertainment. Thank you for choosing the Capitol Theatre!

LUCAS BOHN is energetic with an edge. The perfect blend of schoolboy charm and bad-boy charisma, his comedy is both smart and audacious. Known as the ‘Little guy who generates big laughs,’ Lucas has shared the stage with Dave Chappelle, Jimmy Fallon and Kevin Hart. Lucas’ high-energy shows and hilarious impersonations make him an instant his with audiences of all ages. In 2013, Lucas was nominated “Comedian of the Year” by Campus Activities Magazine.

ROB MAHER is a regional winner of Comedy Central’s Up Next Competition. He is a favorite performer at the DC Improv and at Funny Bone’s all the over the country and can be seen this year on Kevin Hart’s new Comedy Central show, Hart of the City.  Rob’s also had the fortunate opportunity to go overseas and perform for our troops. He’s performed in 17 countries including Afghanistan, Japan, Kyrgyzstan, Turkey, Italy and Egypt.

IRWIN LORING who works with the Capitol Theatre finding and booking standup comics, will host the show.

Warning: Mature language and themes – NOT recommended for minors.
$15 per household. Ticket buyers will be emailed a Zoom invitation approximately 30 minutes before the event is scheduled to begin.